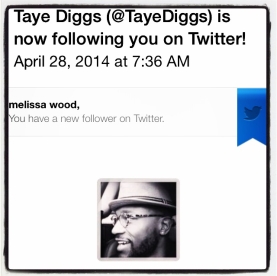 There’s really nothing quite as out of this world fantastic as waking up to read an email like that.

And before coffee, even.

Of course, the first thing I had to do was think: “Man-o-man, what a trip! Are you kidding me?” And then, “I need coffee!”

The next thing to do? Send a group text to my three children.

My son, probably not going to get a response out of him, the poor guy growing up in a house with a bunch of goggly-eyed girls…but my daughters?

Both in college, both clocked in years couch-side with me glued to “Private Practice”, “Best Man”, “Best Man Holiday” (well, we actually were theatre-seat-side to grab this one over Christmas), “Baggage Claim”, “How Stella Got Her Groove Back”, “Brown Sugar”, “Chicago”, “Grey’s Anatomy”, and, Holla, can you say “New Girl”?

Can you say Taye?!

No sooner had the text been sent, than the phone rang its head off.  Daughter #2.

Hilarious laughing ensued, much screaming, and best of all: her permission for me to date and/or marry, @TayeDiggs.

Ok, got the blessing. THAT’S a relief.

Daughter #1 was soon to report in, via text, in an equally flabbergasted way. Incredulous & giddy.

Truth is, Twitter is a wacky reality-bending device whereby we mere mortals can mingle, just a bit, with the bright shiny constellation known as ‘stars’: those well-known entities that hover out there, just above our own gritty, everyman existence. The fact that, in 140 characters or less, we can discuss, discourse, digest, and retweet, which in layman’s terms means: casually wave, grab a quick chat, recommend a good book, share an article or vacation tip, or simply appear, virtually, digitally, at the right place at the right time to cross paths with another twitter time traveler.

This, then, like ships passing in the night, did @TayeDiggs somehow, at some moment, glance at a mention by a mutual connection, retweeted and titled with a sassy heading by yours truly, result in the penultimate morning wake up call.