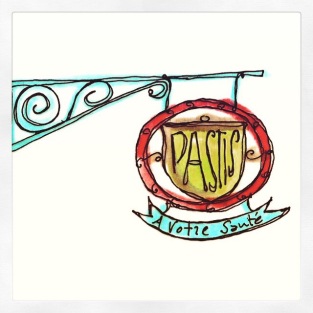 well, since i grew up catholic, i’m compelled to offer up a confession.

(granted, i’ve moved on, but some of that stuff just sticks with you)…so here goes.

i mentioned recently that my daughter, corey, is a fantastic baker. don’t look at me: i’m lousy with measurements, precision and following ANY kind of rules or direction at all.  (see note about moving on from that group…!).  today is my dad’s 82nd birthday, and my lambie pie youngest tot is in charge of the cake…mouth-watering for sure.

all this birthday planning about my dad and my daughter and cakes made me think of one thing.  well, not really one.  my brain is incapable of having only one of anything at one time…which sometimes is just ridiculous.  but, as the cake story popped into my head, other macabre images came flying in along with it.  which leads me to say: all you need is a sign.

i have a history of sign stealing.  now, at 51, all spiritual (again, note the part about leaving that group, above), intuitive & fruity, i just look for them without stealing them.  omg, talk about bad kharma!

when i was in high school, it was the only naughty thing i did.  for real. well, except for spray-painting the silo down the road, and tp-ing a few houses, and stealing a roll of sod and a construction horse.  but, primarily, it was street signs that lured me. probably a clue that i would end up in graphic design, you think?  trust me, i know the error of my ways, but compared to the insane ‘fun’ teens are up to these days, i’d take sign-stealing kids any day of the week.

i’m not sure when the itchy fingers got their start.  oh, i know.  and how funny is this: i actually can blame my mom!   summer, 4 siblings and i, watching some cary grant movie in-between swimming and mowing the lawn.  my mom pokes her head into the study, and asks us to do a quick favor for her.  sure, as long as we can get it done during the commercial, we’re in.  apparently, the highway department, and mr. george dunne specifically, had installed a humongous ‘improvements coming’ sign on the road just in front of our property.  my mom was beyond indignant.  this was a quiet country road, and to her, a former city girl, this sign invited trouble, growth, industry, and dreaded traffic.  she told us to go out and steal the sign.

of course we trudged out to do her bidding (this harkens to a dickens moment with the kids in oliver twist…). we had a bit of trouble getting it out of the ground (it was big, and though there were five of us, we were kind of little…), but once up and out, we lugged it off to our forest and buried below a pile of branches.  then, back to the movie!

(i dug that sign up recently…40 years later.  it’s nailed into my hallway wall.  the patina is spectacular, the memories outrageous!)

okay, i have totally lost the point of this story so i will try to focus.  the other bounty included a few street signs…souvenirs of the roads my friends and i drove around on, endlessly, in my saab, in search of parties, and, well, signs.  the only private property i ever took (this really makes me feel like i’m horrible!) was a gorgeous hand-painted sign from the house down the road.  crisp white, a lovely bit of curve to the edges, with a proud black-shaped title of the house and the year it was built. circa 1872.  i took that sign with me to my college dorm rooms, my city apartments (a great impromptu coffee table for bloody mary’s), and eventually to my house in the village where my little family grew.

i’m a big one for making amends.  about eight or nine years ago, i had the kids hop into my car and i drove straight over to that house.  i pulled the sign out of the trunk, and much to my children’s horror, i walked up to the door, rang the doorbell, and confessed my crime to the new owners of the house. this is a lesson for the young, i was sure.  it’s never too late for forgiveness, and it was never too late to tell the truth!  it felt terrific.  these nice people laughed their heads off, happily accepted the returned loot, and invited me in for a drink!  ah, the feeling of vindication was absolute.

so, back to the birthday cake.  here’s the kharma part.  it’s not pretty!

eleven years ago, corey made a cake for my dad’s birthday.  her skills weren’t quite as refined as they are now, but at five, she did an outstanding bit of handiwork with a round, brown cake, adorned with multi-colored squiggles and a few candles. so cute!

we drove out to my parents house, and realized, as we pulled into the driveway that we had forgotten the cake at home.  not to ruin corey’s thrill of presenting that prize to grampa, i dropped the kids off with my parents, brother and his family, and ran back to town to fetch the cake.

it’s not far.  a five minute drive (well, with the new traffic due to roadway improvements, it probably took more like 7 each way, plus one minute to get in and out of the house to grab the cake).

woe to what can happen in under 15 minutes!

i let myself into my parents front door, greeted by my sister-in-law, who looked ashen.  that was weird, i thought…wonder what’s wrong with her?  i assumed that she was meeting me at the door to gaze lovingly at corey’s cake (she’s a baker too)…instead, she said, “do you think she’s going to be okay?”

i looked down the hall to the kitchen to see a crowd of nephews, a niece, a son, a daughter, a brother, and a father all gathered around my cute tot, who was sitting on the kitchen counter patiently, while her gramma stuck a band-aid in her hair.

this was freakishly surreal.

i plowed through, not unlike the visual as the grinch returns to who-ville with that sleigh filled with presents: let me tell you, the crowd parted.

it seemed as though corey had quite a bit of blood at the top of her head.  i grabbed her, threw on the faucet, tipped her sideways to shove her head under the water, and took a look.

apparently, in a moment of family bonding, my three children and their cousins decided to create a clubhouse in the barn loft….the very spot their parents spent much of their childhood (when not staring at the ‘idiot box’ or stealing signs). darling.  the kids found some of the dust-covered ‘treasures’ (street signs) in the basement,  and decided to use them for decoration.  cool!

the girls, nurturing little future home makers, decided that the signs needed to be washed first. and why not, used a LOT of very slippery soap.  beyond this, inexplicably, while the boys were busy in the loft killing wasps or tying long ropes or something, hallie began to carry the largest sign up the loft ladder.

a moment to make a quick comment.  hallie hates this part of the story, so i’ll be brief.  her universal intelligence, beauty, poise and wit are rock solid.  her upper body strength were not.  (did that sound okay, hal?)

so, get this.  a 7 year old girl is climbing up a ladder, using one hang to grab the rungs.  she is holding a very slippery corner-street sign: the two streets connected by two very large, very heavy metal blobs.  inches beneath her is her older cousin. older, meaning 10.  and waiting patiently, DIRECTLY BENEATH THE LADDER, is our story’s heroine and most excellent birthday cake baker.

remember, all of this happened in under 10 minutes.

the sign is heavy, the sign is slippery, the sign is gone.  out of hallie’s lovely fingers, grazing audrey’s shoulder, and lands squarely, point down, atop corey’s head.

well, it all turned out just fine.  there was a big gash on her scalp, which the nice people in the emergency room stapled shut.  the staff was much more perplexed by the band-aid stuck in corey’s mottled hair.  the nurse asked her who did this to her. when told, she said, “well, when you get home, go put a band-aid in your gramma’s hair, and see how she likes it!”

so, here were are, years later, about to enjoy yet another of corey’s baked confections.  and as i said, i learned my lesson.  my stealing days are over.  but wow, i still love signs.  but instead of driving around snatching them, they float, unbeckoned and swift, flowing through me, conjuring up my wild imagination.